Research – The monitoring program for algal toxins in shellfish 2021

In general, less poisonous shells were detected during the covid-19 years 2020 and 2021 than in the three previous years. We cannot determine whether this is due to fewer samples or less blooms of toxic algal plankton.

In 2021, a total of 723 shell samples were taken and analyzed for various toxins; 384 samples from the Norwegian Food Safety Authority’s annual monitoring program (including the Mussel Alert) and 339 samples from the producers’ own control samples.

The number of samples from the industry was somewhat fewer in 2021 because demand for shells was lower due to covid-19 with closed restaurants and hotels.

On the monitoring of algal toxins in shellfish

The Norwegian coast is monitored throughout the year for marine algal toxins in shells in connection with commercial harvesting and trade in addition to the Mussel Alert.

The shell samples are analyzed for both the fat-soluble toxins DSP (OA group), AZA, YTX and PTX and the water-soluble toxins with the neurotoxin PSP (STX group), and for the amnesia toxin ASP (DA group). 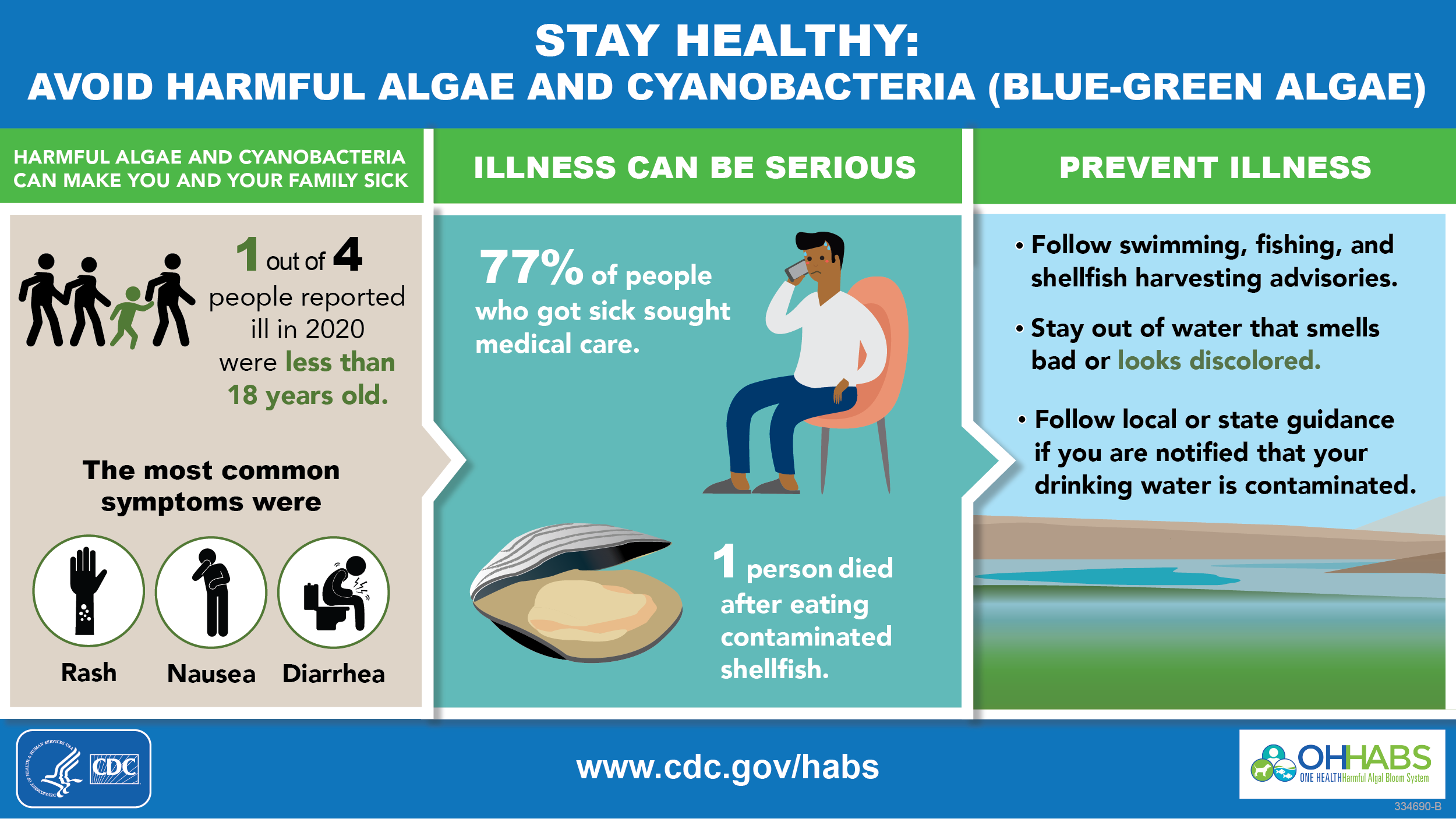 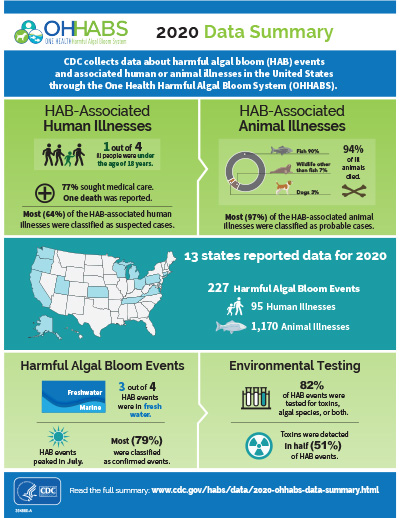 Harmful algal blooms (HABs) that result from the rapid growth of algae or cyanobacteria (sometimes referred to as blue-green algae) in natural waterbodies can harm people, animals, or the environment. HAB events of public health concern are primarily caused by microalgae called diatoms and dinoflagellates, cyanobacteria, and the toxins they can produce. HAB events, which can be intensified by factors such as nutrient pollution and warmer water temperature, can have public health, environmental, and economic impacts.

HABs are a One Health issue—they affect the health of people, animals, and our shared environment. One Health is a collaborative and multi-sectoral approach that involves engagement across disciplines including public health, animal health, and environmental health. Using a One Health approach, CDC collects data about HAB events and associated human or animal illnesses through the One Health Harmful Algal Bloom System (OHHABS) to inform public health prevention efforts.

Within the context of OHHABS, the term HAB event describes the identification of a bloom or the detection of HAB toxins in water or food (i.e., absent a visual bloom). Human illnesses are reported individually. Animal illnesses are reported as single cases of illness or in groups, such as flocks of birds. The reporting system can link HAB event data with human or animal illness data. OHHABS uses standard definitions [PDF – 3 pages] to classify HAB events as suspected or confirmed and human or animal illness as suspected, probable, or confirmed. 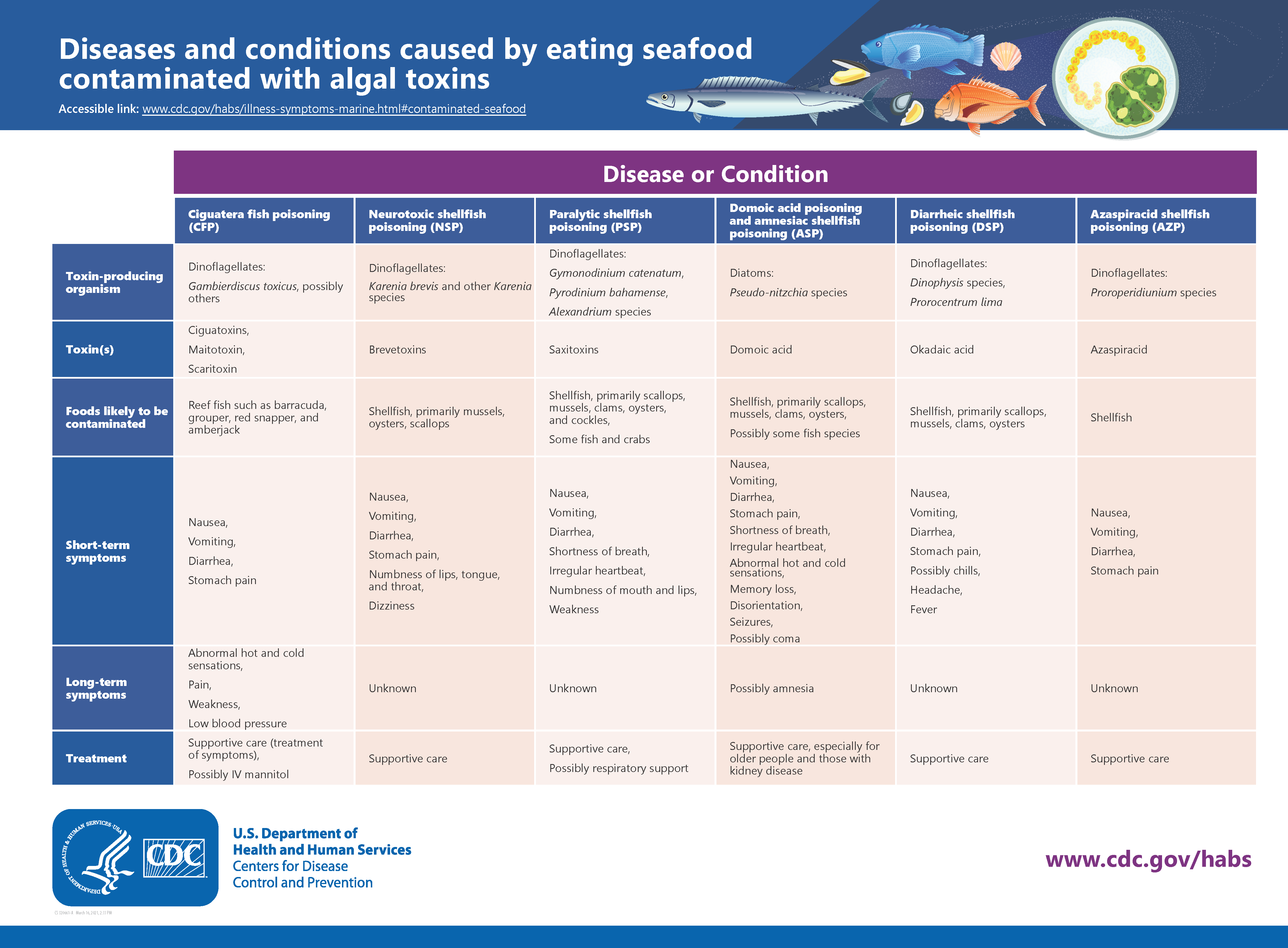 When phytoplankton and algae in marine waters occur at levels that pose a health risk to humans, animals, and the environment, they are referred to as marine harmful algal blooms (HABs). The US Centers for Disease Control and Prevention (CDC) provide resources on potential human and animal exposures to marine HABs or associated marine biotoxins via skin contact or inhalation, or consumption of fish and shellfish.

Detection of lipophilic toxins on tellins from France in Belgium, Italy, Netherlands, Spain and Switzerland

The lipophilic toxins in shellfish can be divided into four groups of toxins with different chemical structures and biological effects: OA and its derivatives, the DTXs; the pectenotoxins (PTXs); the yessotoxins (YTXs); and the azaspiracids (AZAs). These toxins can often be found in combination in shellfish.

Three children lost their lives after consuming sea turtle flesh on Pemba Island in Tanzania’s Zanzibar. On November 27, police reported that all of the children who died belonged to the same family. According to Juma Sadi, the regional police chief for Pemba North, 22 additional individuals have been brought to hospitals after eating sea turtle flesh on Friday, Xinhua reported.

The police added that samples of the sea turtle flesh have been delivered to the appropriate authorities for testing to examine the cause of the fatalities. “Two of the people admitted to hospital are children and they are in critical condition,” Juma Sadi was quoted by Xinhua as saying. He further highlighted that the sea turtle flesh is suspected of being poisonous.

Algae on the seafloor are known to discharge deadly poisons between the months of November to March when the nation’s temperatures rise and during these months, sea turtles, as well as over 20 kinds of fishes, feast on toxic algae at the bottom of the seafloor. Further, the poisons in the plants eventually seep into the flesh of the organisms that consume them. It has the potential to be lethal if eaten.

A project looking at the risk of ciguatera poisoning in Europe has finished work after almost five years.

An international scientific meeting was held in October for the EuroCigua project which began in April 2016 and ends this month.

Ciguatera is a type of food poisoning associated with consumption of fishery products that contain toxins produced by a microalgae called Gambierdiscus toxicus. The toxin does not affect the appearance, odor or taste of the fish and is not destroyed by cooking, refrigeration or freezing.

It causes an estimated 10,000 to 50,000 cases per year worldwide and outbreaks have been reported in Spain and Portugal. From 2012 to 2018, four European countries reported 23 ciguatera outbreaks and 167 cases.

Results confirmed the appearance of ciguatera in the European Union, having identified native species of fish with ciguatoxins in Macaronesia, Madeira and the Canary Islands. The presence of Gambierdiscus in the Mediterranean Sea, Cyprus and Greece was also detected, as well as the first finding in the Balearic Islands.

Every year, the New South Wales Food Authority (NSW Food Authority) releases their Annual Food Testing Report on the testing conducted by their primary testing provider and by other laboratories. This year’s report highlights some key findings with regards to food safety testing results and trends.

Testing is conducted for a variety of reasons including food-borne illness investigations, Food Safety Program verifications and other types of research. In the report, the NSW Food Authority breaks down the significant findings in each of these categories which provides important information for the Australian food industry.

Key facts from the report

The NSW Annual Food Testing Report provides the following facts for the period of July 2018 to June 2019:

3. There were over 70 different types of tests performed. These included:

Key findings from the report

The findings listed in the report are categorized based on different programs. The following is a breakdown of some of the key findings:

Testing was conducted and monitoring took place to determine where the outbreak was stemming from. The investigation involved taking 2,072 samples from egg production businesses and testing eggs and environmental samples. The results from the testing showed that Salmonella Enteritidis was on 13 properties that were interconnected through people, eggs and/or equipment.

The result was six food recalls at the consumer level from properties affected in NSW, and one consumer level recall in Victoria. The report states that surveillance and monitoring of NSW egg farms is slated to continue throughout 2020.

Decrease in Listeria prevalence in melons

The melon industry in Australia, particularly the rockmelon industry, has been linked to food-borne illness outbreaks of Listeria in recent years. The report states that listeriosis cases in New South Wales has actually declined sharply as of late, which is being attributed to the improved food safety measures that have been put in place in the Australian melon industry.

Concerns about Campylobacter and Salmonella on poultry

Campylobacter and Salmonella infections are both significant health concerns for Australians. In order to monitor the prevalence of these two food-borne pathogens, the raw poultry verification program gathers ongoing data on their prevalence and levels in raw poultry.

The results for processing plants:

The results for retail facilities:

There are other types of food-borne pathogens that are not as well known as Listeria, Salmonella or Campylobacter. The report touches on how some algae produce toxic compounds that can then accumulate in certain types of fish, particularly filter-feeding bivalve shellfish. The concern is that the toxic compounds can be harmful to humans if they are consumed by eating the shellfish.

The NSW Food Authority will continue to investigate the health concerns around algae toxins in harvest shellfish in the 2019-2020 fiscal year.

The Ministry for Primary Industries today extended the current public health warning against collecting shellfish from the west coast of the North Island. The warning now extends from South Head (Manukau Harbour entrance) to Tirua Point (south of Kawhia Harbour).

Paralytic Shellfish Poisoning (PSP) toxins have been detected in shellfish from the Kawhia Harbour above the safe limit set by MPI.

The other public health warning for Hawke’s Bay remains in place.

Pāua, crab and crayfish may still be eaten if the gut has been completely removed prior to cooking, as toxins accumulate in the gut. If the gut is not removed its contents could contaminate the meat during the cooking process.

Symptoms typically appear between 10 minutes and 3 hours after ingestion and may include:

If anyone becomes ill after eating shellfish from an area where a public health warning has been issued, phone Healthline for advice on 0800 61 11 16, or seek medical attention immediately. You are also advised to contact your nearest public health unit and keep any leftover shellfish in case it can be tested.

Monitoring of toxin levels will continue and any changes will be communicated accordingly. Commercially harvested shellfish – sold in shops and supermarkets, or exported – is subject to strict water and flesh monitoring programmes by MPI to ensure they are safe to eat.

OYSTER and black mussel producers who mainly export to Asia have stopped harvesting and exporting since last week after routine tests revealed the delicacies were contaminated with ‘diarrhoeatic shellfish poisoning’ (DSP), which can make people very sick.

The fisheries ministry issued an alert last week, warning people not to eat oysters or mussels from Lüderitz and Walvis Bay.

Chief fisheries biologist Frikkie Botes said such spells of contamination, which is a seasonal occurrence – mainly during summer from October to April – result in the shellfish industry suffering economic losses.