USA – Shigella Outbreak at Wedding in Oregon Linked to Asparagus 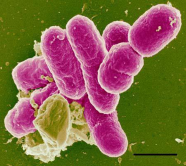 According to data presented at the CDC’s Annual Epidemic Intelligence Service Conference, contaminated asparagus was the likely source of a Shigella outbreak at a Yarnhill County wedding in Oregon in 2018. One hundred twelve people were sickened; 10 people were hospitalized.

A total of 263 people attended the wedding. Seventy-five percent of those people responded to the survey. The patient age range was from 2 to 93 years. Of the 95 people who responded, 97% said they got sick within 12 to 72 hours after the wedding. Fifty-seven patients went to a health care facility.

Investigators found that only asparagus was associated with illness.

The FDA is investigating a subset of a larger outbreak investigation being conducted by the Centers for Disease Control and Prevention. Between the harvesting dates of February 12, 2019 and April 9, 2019, five ill patients reported eating raw oysters shortly before becoming ill with Shigella flexneri. One of the five patients was hospitalized; there have been no deaths. The last illness onset was April 17, 2019. Laboratory analyses were used to confirm that reported clinical illnesses matched pathogens found in product samples and traceback information indicated the implicated shellfish were harvested from Estero El Cardon, in Baja California Sur, Mexico.

The FDA confirmed that oysters harvested in Estero El Cardon, Baja California Sur, Mexico, were distributed to California, Nevada, New York, and Arizona with illnesses reported in California, Nevada and New Hampshire. The New Hampshire case reported eating at a restaurant in California shortly before becoming ill. It is possible that additional states received these potentially contaminated oysters either directly from Mexico or through further distribution within the U.S.

On May 7, 2019, the Mexican Shellfish Sanitation Program authorities voluntarily closed the growing area of Estero El Cardon and halted oyster harvesting in response to the reported illnesses. The shelf-life of fresh, raw oysters is limited. All raw oysters from this growing area are no longer expected to be available to consumers. For more information please see www.issc.org/noticesExternal Link Disclaimer.

Consumers should not purchase oysters marketed as being harvested from Estero El Cardon, in Baja California Sur, Mexico from restaurants. Consumers who have recently experienced symptoms of foodborne illness should contact their healthcare provider and report their symptoms and receive care.

Symptoms of shigellosis generally develop within 8 hours or up to about 2 days. Although shigellosis is often mild and goes away by itself in a week or less, it can become very serious in some cases. Severe cases can be treated with certain antibiotics. Symptoms of shigellosis may include watery stool that may have blood, pus, or mucus in it, vomiting, cramping, and fever. Young children, the elderly, and people with a weak immune system are more likely than others to develop severe illness.

If you suspect you have symptoms of shigellosis, contact a health professional.

A Vibrio Shigella E. coli and norovirus outbreak linked to raw oysters from Baja California Sur, Mexico has sickened at least 12 people in California, according to the California Department of Public Health (CDPH).

Those twelve patients reported illnesses in February, March, and April 2019 after consuming raw oysters that were sold by restaurants and retailers in Los Angeles, Orange, Santa Barbara, and San Diego counties. The raw oysters were sold throughout the state.

Lab testing was performed on isolates from eight cases. Officials identified Vibrio parahaemolyticus in three patients, Vibrio albensis in one, an unidentified species of Vibrio in one patient, Shigella flexneri serotype 1 in two patients, and norovirus. In addition, one of the people infected with Vibrio parahaemolyticus cases was co-infected with non-O157 Shiga toxin-producing E. coli bacteria.

Traceback evidence has shown that the oysters were harvested from Estero El Cardon. Authorities in Mexico have been notified about this outbreak and are investigating.

On October 22, 2018, the Vermont Department of Health (VDH) notified CDC’s Waterborne Disease Prevention Branch of an outbreak of diarrhea caused by Shigella sonnei among residents, visitors, and staff members of a retirement community in Chittenden County, the state’s most populous county. High-quality single nucleotide polymorphism (SNP) analysis predicted initial isolates were multidrug resistant (MDR), and were closely related to a concurrent multistate cluster (differing by 0–11 SNPs). In the United States, rates of MDR shigellosis are increasing (1); outbreaks of MDR shigellosis are more common among men who have sex with men and are rare in retirement community settings (2). CDC collaborated with VDH to identify additional cases, determine transmission routes, and recommend prevention and control measures.

The National Advisory Committee on Microbiological Criteria for Foods (NACMCF or Committee) was asked to report on (i) what is currently known about virulence and pathogenicity of Shiga toxin–producing Escherichia coli (STEC) and how they cause illness in humans; (ii) what methods are available to detect STEC and their specific virulence factors; and most importantly (iii) how to rapidly identify foodborne STEC that are most likely to cause serious human disease. Individual working groups were developed to address the charge questions, as well as to identify gaps and give recommendations for additional data or research needs. A complete list of Committee recommendations is in Chapter 4.