QUEBEC, June 14, 2021 / CNW Telbec / – The Ministry of Agriculture, Fisheries and Food (MAPAQ), in collaboration with Fouquet Morel Inc., located at 730, boulevard des Récollets, in Trois -Rivers, advise the population not to consume the products indicated in the table below, as these foods are likely to contain the bacterium E. coli O157.

The products that are the subject of this advisory were packaged on June 7, 2021 and have been offered for sale only at the establishment identified above. They were packaged in trays of transparent plastic wrap. They were offered in a refrigerated state. The product label includes, in addition to their name, the words “Fouquet Morel – The real pleasures of the table”.

The operator is voluntarily recalling the products in question. He agreed with MAPAQ to disseminate this warning as a precautionary measure. In addition, people who have any of these products in their possession are advised not to consume it. They must return it to the establishment where they bought it or throw it away.

It should be noted that proper cooking of meat destroys the E. coli O157 bacteria in all cases. Preparing ready-made meals, such as spaghetti sauce, shepherd’s pie, or meat pie, requires a fairly long cooking time and a temperature high enough to destroy the bacteria.

Food contaminated with E. coli O157 may not look or smell spoiled, but eating such foods can cause serious illness or death. They are manifested by diarrhea and abdominal pain, often accompanied by blood in the stool. These symptoms usually appear two to ten days after eating a contaminated food. Nausea, vomiting and sometimes fever can be associated with it. When these symptoms appear, it is strongly recommended to consult a doctor without delay. Most symptoms go away within five to ten days.

To date, it should be indicated that a case of illness has been reported to MAPAQ and that it could be associated with the consumption of this category of food. 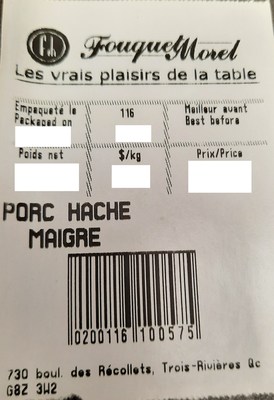 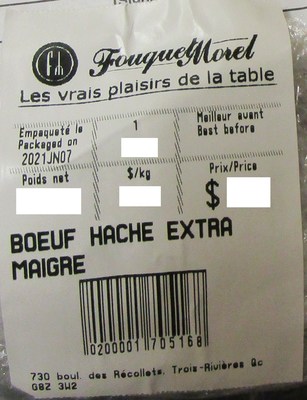 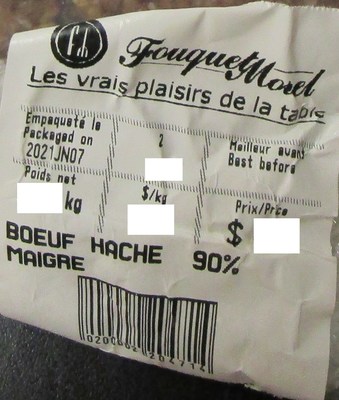 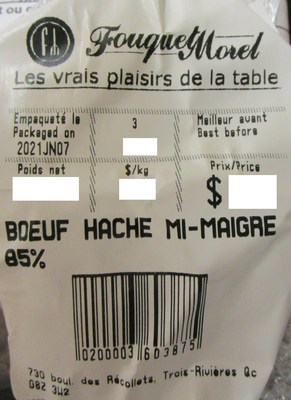 This study aimed to investigate the inactivation of foodborne pathogens and the quality characteristics of fresh chicken breasts after Ultraviolet-C light-emitting diode (UVC-LED) treatment. Fresh chicken breasts were separately inoculated with Salmonella Typhimurium, Escherichia coli O157:H7, and Listeria monocytogenes at an initia population of 6.01, 5.80, and 6.22 log 10 CFU/cm 2 , respectively, then were treated by UVC-LED at 1000 to 4000 mJ/cm 2 . UVC-LED irradiation could inactivate the tested bacteria in a dose-dependent manner. After UVC-LED treatment at 4000 mJ/cm 2 , the populations of S . Typhimurium, E . coli O157:H7, and L . monocytogenes on chicken breasts were decreased by 1.90, 2.25, and 2.18 log 10 CFU/cm 2 , respectively. No significant ( P > 0.05) changes were found in the color, pH value, texture properties, and thiobarbituric acid reactive substances (TBARS) values of chicken breasts following the UVC-LED radiation at doses up to 4000 mJ/cm 2 . Overall, this study indicates that UVC-LED is a promising technology to reduce the number of microorganisms while maintaining the physico-chemical characteristics of poultry meat.

In August 2017, a cluster of four persons infected with genetically related strains of Shiga toxin-producing Escherichia coli (STEC) O157:H7 was identified. These strains possessed the Shiga toxin (stx) subtype stx2a, a toxin type known to be associated with severe clinical outcome. One person died after developing haemolytic uraemic syndrome. Interviews with cases revealed that three of the cases had been exposed to dogs fed on a raw meat-based diet (RMBD), specifically tripe. In two cases, the tripe had been purchased from the same supplier. Sampling and microbiological screening of raw pet food was undertaken and indicated the presence of STEC in the products. STEC was isolated from one sample of raw tripe but was different from the strain causing illness in humans. Nevertheless, the detection of STEC in the tripe provided evidence that raw pet food was a potential source of human STEC infection during this outbreak. This adds to the evidence of raw pet food as a risk factor for zoonotic transmission of gastrointestinal pathogens, which is widely accepted for Salmonella, Listeria and Campylobacter spp. Feeding RMBD to companion animals has recently increased in popularity due to the belief that they provide health benefits to animals. Although still rare, an increase in STEC cases reporting exposure to RMBDs was detected in 2017. There has also been an increased frequency of raw pet food incidents in 2017, suggesting an increasing trend in potential risk to humans from raw pet food. Recommendations to reduce the risk of infection included improved awareness of risk and promotion of good hygiene practices among the public when handling raw pet food.

More patients are being identified by investigators working on an E. coli O157 outbreak that has been limited to Washington State. However, today Arizona officials confirmed there is a child in that state with an infection from the same strain of the pathogen.

There are 11 confirmed patients in Washington in the outbreak linked to locally produced organic yogurt sold by Pure Eire Dairy. Another three probable patients are from the Moses Lake area in Grant County, WA. Teresa McCallion of the Washington Department of Health said it is not unusual for counties and local health departments to know of probable cases before they are added to the state’s tally.

“We only report confirmed cases,” McCallion told Food Safety News on Wednesday evening. The Washington Health Department is working on a special outbreak information web page, which McCallion said should be available soon.

The Washington State Department of Health (DOH) is working with local health jurisdictions to respond to a multi-county outbreak of E. coli O157:H7 that may be linked to fresh produce.

The outbreak currently includes six confirmed cases across Benton County (1), King County (3), Snohomish County (1) and Walla Walla County (1). DOH is only reporting confirmed cases infected with bacteria that have been genetically linked, but local health officials may report higher numbers for their counties that include cases still under investigation.

There is one case in the outbreak between ages 0-9, two cases age 10-19, one case age 20-29, one age 30-39, and one case age 70-79. Three cases have been hospitalized and one case developed hemolytic uremic syndrome (HUS). HUS is a serious complication of E. coli O157:H7 infection that can damage the kidneys and other organs. The earliest case in the outbreak started having symptoms March 9, and the most recent case had symptoms starting April 21.

The U.S. Food and Drug Administration will be collecting and testing samples of lettuce grown in California’s Salinas Valley from local commercial coolers from May through November 2021. The agency will test the samples for Shiga toxin-producing Escherichia coli (STEC), including E. coli O157:H7, and Salmonella spp. as part of ongoing surveillance efforts following reoccurring outbreaks linked to this region, including most recently in the fall of 2020.

The FDA assignment will direct sampling to be conducted at commercial cooling and cold storage facilities where field heat is removed from harvested lettuce and where product is cold-stored before processing. Sampling may include pre-cooled product (preferred) or post-cooled product. Sample collection at commercial coolers helps the FDA efficiently obtain samples from multiple farms at centralized locations and facilitates prompt traceback and follow-up if contamination is detected.

The agency plans to collect and test a total of approximately 500 post-harvest samples of iceberg, leaf and romaine lettuce. Each sample will consist of 10 subsamples, each made up of one head of lettuce (trimmed, cored and possibly wrapped), or in the case of romaine lettuce, loose leaves or one package of hearts.  FDA laboratories will conduct all testing.

During this sampling assignment, the FDA will take extra precautions to help ensure the safety of agency investigators and firm employees during the COVID-19 pandemic. FDA investigators will preannounce their visits to firms per the Agency’s COVID-19 safety practices. They will be outfitted with personal protective equipment (PPE) and will carry out their work while adhering to local, state and applicable CDC guidance.

Helping to ensure the safety of leafy greens remains a high priority of the FDA. This assignment adds to other work underway in collaboration with stakeholders in the California Central Coast growing region to identify where the recurring strain of pathogenic E. coli is persisting and the likely routes of leafy green contamination with STECs.  This includes continued implementation of actions identified in the recently updated Leafy Greens Action Plan, including a multi-year longitudinal  study to assess the environmental factors impacting the presence of foodborne pathogens in this region. Consistent with the action plan, if the FDA detects a pathogen such as E. coli O157:H7, the agency will conduct a follow-up investigation to identify potential sources and routes of contamination. Such investigations are designed to inform what additional preventive measures may be needed to help prevent outbreaks of foodborne illness.