As of September 25, 2020, CDC has announced this outbreak is over. FDA’s traceback investigation is complete, however the cause or source of the outbreak has not been determined. FDA’s investigation is continuing, in consultation with the state agriculture and regional water board.

FDA investigated multiple farms identified in the traceback, one of which led to sampling and investigation around a farm in south Florida. FDA continues to work with the state of Florida and the local water district to try to determine the source and impact of Cyclospora that was found in the regional water management canal (C-23), located west of Port St. Lucie, Florida. Given the emerging nature of genetic typing methodologies for this parasite in foods and in environmental samples, the FDA has been unable to determine if the Cyclospora detected in the canal is a genetic match to the clinical cases, therefore, there is currently not enough evidence to conclusively determine the source of this outbreak. However, the presence of Cyclospora in a canal that had previously supplied irrigation water in the region, and specifically to a farm identified in the traceback, suggests the need for a collaborative effort by state, federal and industry partners to better define the scope of the contamination and identify appropriate risk mitigation measures.

USA/Canada – 1,139 Sickened by Cyclospora in the United States and Canada

1,139 Sickened by Cyclospora in the United States and Canada

As of August 26, 2020, 1,102 laboratory-confirmed cases of cyclosporiasis in people who had no history of international travel during the 14-day period before illness onset have been reported to CDC by 35 jurisdictions, including 34 states and New York City, since May 1, 2020. In Canada, as of July 8, 2020, there are 37 confirmed cases of Cyclospora illness linked to this outbreak in three provinces: Ontario (26), Quebec (10) and Newfoundland and Labrador (1). Individuals became sick between mid-May and mid-June 2020. One individual has been hospitalized. No deaths have been reported. Individuals who became ill are between 21 and 70 years of age. The majority of cases (76%) are female.

The FDA and CDC have been investigating a multistate outbreak of Cyclospora involving bagged salads from Fresh Express since June. Although the products were recalled and should no longer be available in retail locations, the CDC continues to report more cases. As of August 12, 2020, the CDC counted 690 people with laboratory-confirmed Cyclospora infections throughout 13 states. Thirty-seven people have been hospitalized, and no deaths have been reported.

As the FDA conducted its traceback investigation to find the source of the outbreak linked to the Fresh Express products, the agency was able to identify several farms. It analyzed water samples from two public access points along a regional water management canal (C-23) west of Port St. Lucie, Florida. Using the FDA’s validated testing method, the samples tested positive for Cyclospora cayetanensis. However, it is important to note that the Cyclospora found might not be a direct match to the pathogen found in the clinical cases.

USA -Cyclospora cases from bagged salad mix continue are on the up.

The outbreak of parasitic infections linked to Fresh Express bagged salad mix has grown by 49 new laboratory-confirmed cases of Cyclospora, upping the total to 690 people, up from 641.

Eighty-two individuals in Texas got sick after suffering from cyclosporiasis, a parasitic infection that causes a range of symptoms.

The Centers for Disease Control and Prevention (CDC) stated that cyclosporiasis is an illness caused by a microscopic parasite. Fox News reports that the symptoms of this infection include diarrhoea, frequent bowel movements, loss of appetite, bloating, weight loss, stomach cramps, fatigue, and nausea. These symptoms can take up to a week to appear following an infection.

The most common source of the parasite is water or food contaminated by feces. However, public health officials in Austin, Texas are still trying to find out where the intestinal illness came from, which affected Austin-Travis County.

Health officials stated that previously, the source of such an outbreak would either be fruits or vegetables. The most common food sources include basil, cilantro, onions, and raspberries.

In July, the CDC warned multiple states of a cyclospora outbreak from bagged salads. However, Texas was not included in the list.

Austin Public Health (APH) announced it was investigating an outbreak of Cyclospora, an intestinal illness caused by a parasite, after at least 82 cases have been reported since June 1, 2020. This Austin-Travis County Cyclospora Outbreak does not yet have an identified source.

According to  APH Epidemiologist Janet Pichette, “While we may be in COVID-19 season, we cannot forget the other diseases and infections that are commonly present in our community. And as we have said time and time again, there are ways to prevent many of these diseases and infections, including cyclosporiasis – thoroughly wash fresh produce, wash your hands after handling fruits and vegetables, and separate produce from raw meat and seafood.”

Until a source is found, the APH reminds all Texas residents to wash their hands and their produce.

USA – 641 CASES OF CYCLOSPORA REPORTED IN US: NEW OUTBREAK LINKED TO SALAD PRODUCT

More than 640 people in 11 US states have been diagnosed with Cyclospora, with the outbreak possibly related to bagged salad products. The bagged salads included iceberg lettuce, red cabbage, and carrots. Symptoms of cyclosporiasis, a disease caused by a microscopic parasite, include lack of appetite and weight loss, bloating, nausea, low-grade fever, weakness, and diarrhea. Cases have been recorded in almost a dozen states between May and this month. Of those infected with the multi-state outbreak of Cyclospora, 37 were hospitalized, the Food and Drug Administration said. There were no confirmed deaths.

The outbreak is being investigated by the FDA, the CDC, and the state and local authorities. Cyclospora infections may be linked to salad products manufactured by Fresh Express containing iceberg lettuce, red cabbage, and carrots and distributed in several regions of the United States. 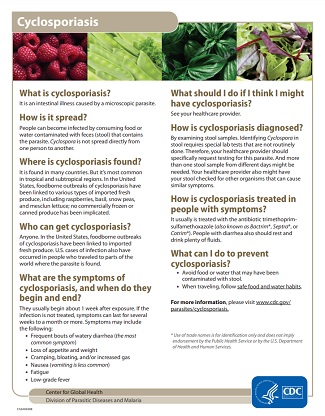 Iowa continues to hold the highest number of cases in the ongoing Fresh Express Bagged Salad Cyclospora Outbreak, compared to the other 7 affected states, with a total of 160 confirmed cases.

Cyclospora, officially known as Cyclospora cayetanensis, is a type of parasite which uses the human gut as its host. The parasite enters the human body by being ingested with fresh fruits, vegetables, or water, at which point the parasite begins to live and multiply in the gut.

The U.S. Food and Drug Administration’s (FDA) reports that the investigation of the Fresh Express Bagged Salad Cyclospora Outbreak continues, as the CDC reports increasingly greater numbers of confirmed cases of infection. The last investigation report published by the FDA concerning the Fresh Express Cyclospora Outbreak, on June 28, 2020, accounted for 206 confirmed cases of Cyclospora infection. As of July 8, 2020, the FDA announced that the number of confirmed cases have jumped to a total of 509, across 8 states. Furthermore, health officials report that the outbreak has even stretched across the borders of the U.S. to three provinces of Canada, Ontario (26), Quebec (10) and Newfoundland and Labrador (1).