Argentina – What is Shigella: The criminal ‘rotten meat’ bacterium

Such as urgent 24 As reported, the Municipality of Berazategui made official two deaths from salmonella and shigella batteries after eating offal and other types of meat in poor condition. The subjects aged 49 and 36, without pre-existing diseases, had acute diarrheal symptoms, which required admission to intensive care with mechanical ventilation, but “died in hospital on January 12 and 17.”

As for the shigella bacterium or bacillary dysentery, it is transmitted by the fecal-oral route, just like salmonella , or by direct contact with infected people. It is endemic in tropical climates, with a higher incidence in summer, in addition to generally presenting in institutions such as nursing homes and schools due to lack of hygiene measures or contagion through food and water.

The impact of dry-ageing of beef and wet-ageing of beef, pork and lamb on microbiological hazards and spoilage bacteria was examined and current practices are described. As ‘standard fresh’ and wet-aged meat use similar processes these were differentiated based on duration. In addition to a description of the different stages, data were collated on key parameters (time, temperature, pH and aw) using a literature survey and questionnaires.

The microbiological hazards that may be present in all aged meats included Shiga toxin-producing Escherichia coli(STEC),Salmonella spp., Staphylococcus aureus, Listeria monocytogenes, enterotoxigenic Yersinia spp., Campylobacter spp. and Clostridium spp. Moulds, such as Aspergillus spp. and Penicillium spp., may produce mycotoxins when conditions are favourable but may be prevented by ensuring a meat surface temperature of−0.5 to 3.0°C, with a relative humidity (RH) of 75–85% and an airflow of 0.2–0.5 m/s for up to 35 days.

The main meat spoilage bacteria include Pseudomonas spp., Lactobacillus spp. Enterococcus spp., Weissella spp., Brochothrix spp., Leuconostoc spp. Lactobacillus spp., Shewanella spp. and Clostridium spp. Undercurrent practices, the ageing of meat may have an impact on the load of microbiological hazards and spoilage bacteria as compared to standard fresh meat preparation. Ageing under defined and controlled conditions can achieve the same or lower loads of microbiological hazards and spoilage bacteria than the variable log10increases predicted during standard fresh meat preparation. An approach was used to establish the conditions of time and temperature that would achieve similar or lower levels of L. monocytogenes and Yersinia enterocolitica (pork only) and lactic acid bacteria(representing spoilage bacteria) as compared to standard fresh meat. Finally, additional control activities were identified that would further assure the microbial safety of dry-aged beef, based on recommended best practice and the outputs of the equivalence assessment. 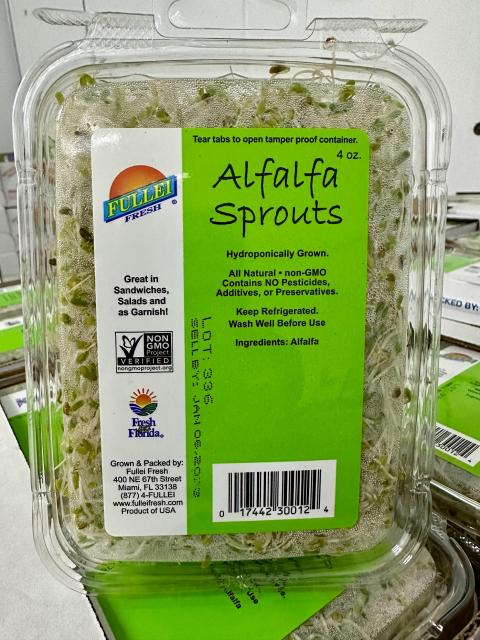 MIAMI, FL – Fullei Fresh is voluntarily recalling Alfalfa Sprouts due to the detection of Shiga toxin producing E.coli (STEC.) Shiga toxin producing E.coli is an organism that can cause foodborne illness in a person who eats a food item contaminated with it. Symptoms of infection may include stomach cramps, diarrhea, and vomiting. The illness primarily impacts elderly individuals, children, and people with weakened immune systems. Most healthy adults and children rarely become seriously ill.

STEC is a bacterial strain that is not part of our routine microbial testing conducted in compliance with the FDA’s Produce Safety Rule Subpart M on every lot we produce. It was detected upon sampling of finished product by the FDA.

There have been no known illnesses reported to date in connection with this product.

The affected Fullei Fresh brand alfalfa sprout lot number is 336. They were shipped to distributors and retailers in Florida between December 9-23, 2022. No other lots or products are affected.

The lot numbers are printed on the 8 ounce retail packs and on 5 lb. bulk cardboard boxes in the barcode (the last 3 digits being 336.) Pictures are attached.

Should you be in possession of these products, please discard.

This recall is being made with the knowledge of the Food and Drug Administration and the Florida Department of Agriculture.

Flour is a natural product and a valuable foodstuff.

However, Shiga toxin-producing Escherichia coli (STEC) were detected in multiple flour samples (wheat, spelt and rye) during routine food monitoring in Germany in 2018. Escherichia (E.) coli are bacteria that occur naturally in the intestines of animals and humans and the detection of E. coli in food is a strong indicator of a faecal contamination.

Bacteria from the faeces or stool can be shed into the environment and subsequently contaminate various animal- and plant-based foods. Direct transmission between animals and humans and from humans to humans are also possible. Certain toxin producing variants of E. coli can cause serious diseases in animals and humans.

E. coli variants that can form Shiga toxins are of particular importance for humans. These are abbreviated as STEC. STEC, which cause diseases in humans, are referred to as entero-hemorrhagic E. coli (EHEC). The symptoms of an infection with STEC are initially gastrointestinal.

The possible severity of the disease ranges from watery to bloody diarrhea. In adults, the course of the disease can also proceed without symptoms. A particularly severe complication is the hemolytic-uremic syndrome (HUS). HUS is a disease that manifests in acute kidney failure, blood coagulation disorders and destruction of the red blood cells and can lead to death in individual cases. This form of the disease affects particularly sensitive groups of people, such as young chil-dren.

Ireland – Recall of a batch of Anitca Macelleria Falorni il Salame Con Cinghiale due to the presence of Shiga toxin producing E. coli The above batch of Anitca Macelleria Falorni il Salame Con Cinghiale wild boar salami is being recalled due to the presence of Shiga toxin producing E. coli.

Recall notices will be displayed at point-of-sale.

Shiga toxin producing E. coli (STEC) also known as Verocytotoxigenic E. coli (VTEC) may cause severe bloody diarrhoea and abdominal cramps, although sometimes the infection causes non-bloody diarrhoea or no symptoms. In some groups, particularly children under 5 years of age and the elderly, the infection can also cause a complication called haemolytic uraemic syndrome (HUS), in which the red blood cells are destroyed and the kidneys fail.

Retailers are requested to remove the implicated batch from sale and display recall notices at point of sale.

Caterers should not use the implicated batch.

Consumers are advised not to eat the implicated batch. 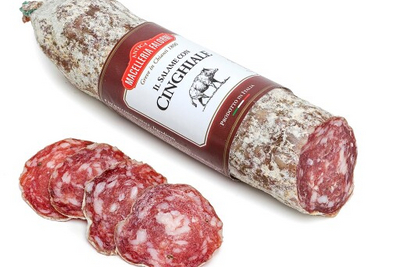 The batch number is on the back of the banderole, the best before date on the side. The producer of the product is “Antica Macelleria Falorni srl, Piazza G. Matteotti 71, IT-50022 Greve in Chianti (IT)”.

The affected product with the batch mentioned should no longer be consumed, as it could possibly be contaminated with verotoxin-forming E. coli (EHEC) .

The symptoms of a possible illness with EHEC can be watery diarrhea or nausea, vomiting and/or abdominal pain, in rare cases also fever and bloody diarrhea. The incubation period after consumption is usually one to three days, rarely up to ten days. Babies and children up to preschool age are more likely to become ill. This group, as well as older people or people with a weak immune system, are particularly at risk of developing severe courses and complications (up to and including acute kidney failure).

If consumers experience the symptoms mentioned, they should consult a doctor immediately and the suspicion of EHEC should be pointed out.

Consumers can return the affected batch of this product to the respective points of sale.

Other batches of the same product and other products from the manufacturer are not affected by this recall. This warning does not mean that the hazard was caused by Interfood.

FSIS will implement the cloth sampling on February 1, 2023, unless the Agency receives substantive comments that warrant further review. Submit comments on or before January 23, 2023.

A multi-country Shigella outbreak in Europe has been linked to stays at some hotels in Cape Verde.

Confirmed Shigella sonnei cases have been reported in the Netherlands, Denmark, France, Germany, Portugal, and the United Kingdom.

The European Centre for Disease Prevention and Control (ECDC) said there is no information about the source of infection but given the increase in travel during the coming holiday season, new cases are likely.

However, Holiday Claims Bureau and Hudgell Solicitors in the UK have noted complaints of illness and poor hygiene standards from holidaymakers, suggesting the source could be contaminated food or water. Holiday Claims Bureau said it had been informed of sick people testing positive for Shigella.

Travelers have described symptoms such as diarrhea, vomiting, stomach cramps, and pains, which in some cases lasted until they returned home.

Anne Thomson, Hudgell Solicitors’ travel litigation executive, said people can suffer as a result of a change in diet and climate.

“However, when we are alerted to situations where a number of holiday guests are affected by similar symptoms, particularly when they are not part of the same traveling group, we feel an investigation is needed to contain any wider outbreak and prevent future problems,” she said.

“Holidaymakers becoming ill having only ever eaten at the specific hotel they are staying at, and concerns raised by guests over standards of hygiene and cleanliness throughout premises, and not just in dining areas, are often red flags to potential underlying problems.”