Matvælastofnun warns against  Sportmix original cat food cat food  from  Midwestern pet food  in 6.8 kg bags due to aflatoxin mold toxin. The company Pak ehf. has recalled the feed with the help of the Food Administration. The feed was taken from online sales at the end of December and buyers were contacted.

The recall only applies to the following batches: 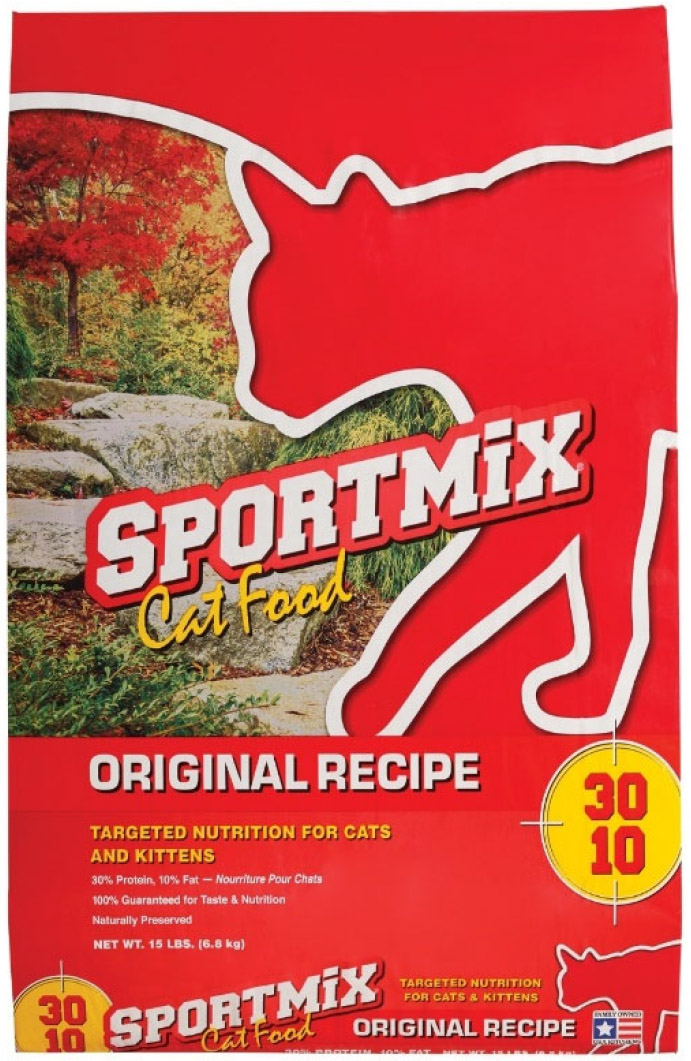 Aflatoxin is a poison produced by the fungus Aspergillus flavus  which can grow on maize and other grains used in pet food. If the poison is high in the product, it can cause illness or even death.

Aspergillus flavus and A. parasiticus are the main causes of aflatoxin contamination in various foods, particularly grains, as they can thrive in environments with lower water activity and higher temperatures. The growth of Aspergillus and the formation of the mycotoxins aflatoxin and cyclopiazonic acid are strongly influenced by environmental stimuli and can be reduced by modulating parameters such as water activity, pH, temperature and light during the storage. This study has two objectives—on the one hand, to assess how global warming and an increase in exposure to sunlight affect growth and mycotoxin formation, and on the other hand, how the findings from these experiments can be used to reduce fungal growth and mycotoxin formation in stored foods. Using growth substrates with two different water activities (aw 0.95, aw 0.98), together with a light incubation device consisting of different chambers equipped with diodes emitting visible light of five different wavelengths (455 nm, 470 nm, 530 nm, 590 nm, 627 nm) plus white light, we analyzed the growth and mycotoxin formation of selected Aspergillus flavus and A. parasiticus isolates. It was shown that light with a wavelength of 455/470 nm alone, but especially in combination with a lower water activity of aw 0.95, leads to a significant reduction in growth and mycotoxin formation, which was accompanied by reduced transcriptional activity of the responsible mycotoxin biosynthetic genes. Therefore, these results can be used to significantly reduce the growth and the mycotoxin formation of the analyzed fungi during storage and to estimate the trend of fungal infestation by Aspergillus flavus and A. parasiticus in water activity- and light exposure-equivalent climate change scenarios. Mycotoxin-producing aspergilli can be effective and sustainably inhibited using a combination of short-wave light and lowered water activity in the substrate. A higher annual mean temperature accompanying climate change may lead to an increased spread of aflatoxin-producing fungi in areas that were previously too cold for them. On the other hand, there will be regions in the world where contamination with aflatoxin-producing fungi will be reduced due to increased drought and sun exposure.

The aim of the study was to evaluate the fungicidal effect of a H2O2 mist generating system for disinfection of spores of six food-related moulds (Alternaria alternata, Aspergillus flavus, Geotrichum candidum, Mucor plumbeus, Paecilomyces variotii, and Penicillium solitum) dried on stainless steel. Exposure to H2O2 mist for 2 or 4 h lead to >3 log reduction in mould spores in the majority of the tests. The presence of the soils 2% skim milk or 3% BSA did not significantly alter the fungicidal effect, while the presence of raw meat juice had an adverse fungicidal effect against Penicillium and Mucor in two out of three tests. Fungicidal suspension tests with liquid H2O2 confirmed the effectiveness of H2O2 on reducing the mould spores. Both the surface test and the suspension test indicated that P. variotii is more resistant to H2O2 compared to the other moulds tested. The study shows the efficiency of H2O2 mist on reducing food-related mould spores on surfaces. View Full-Text

Research – Aspergillus-Derived Mycotoxins in the Feed and Food Chain

Aspergillus-produced mycotoxins can enter the feed and food chain at many points in both pre-harvest and post-harvest. Although current climate changes seem to speed up the world-wide spread of mycotoxigenic fungi including the Aspergilli and also facilitate the production of these harmful secondary metabolites the factors governing these disadvantageous global processes are only partly understood or even have remained completely hidden until now. This Research Topic summarizes our knowledge on Aspergillus-derived mycotoxins especially focusing on three major areas of on-going research: (i) toxicological, medical, veterinary aspects, prevalence, detection, risk assessment, control strategies, (ii) ecology and biological control of mycotoxigenic Aspergilli in the fields, and (iii) pre-harvest and post-harvest management of mycotoxigenic Aspergilli and their mycotoxin production. We hope that the wealth of information generously provided by the Aspergillus mycotoxin research community will help the hard work of all those experts, who are active in this important field, and the papers collected here will be instructive and illuminating readings for students and the public as well.

fumonisins (B1 = 2.7 µg/kg – ppb) in shelled groundnuts from Argentina in the UK

Seed processing technologies are essential for seed safety and functionality through protection of physicochemical quality, pathogen inactivation, aflatoxin detoxification and alleviation of mutagenicity. Design of a pilot‐scale unit of pulsed electric fields (PEF) to treat sesame seeds with respect to quality parameters, Aspergillus parasiticus inactivation and aflatoxin reduction as well as alleviation of aflatoxin mutagenicity were prompted in this study. PEF energy ranged from 0.97 to 17.28 J achieved maximum reductions of peroxide value and acidity number of 67.4 and 85.7%, respectively, and did not change color L*, a*, b* and hue values. A 60% reduction of A. parasiticus counts occurred at the maximum PEF energy. Aflatoxins G1, G2, B1, and B2 contents decreased by 94.7, 92.7, 86.9, and 98.7%, respectively. Except for the samples treated by 2.16 J with 100 μg/plate and by 6.80 J with 10 μg/plate, PEF treatment provided elimination of aflatoxin mutagenity. It is concluded that PEF treatment can be used to treat sesame seeds with preservation of physicochemical properties, inactivation of A. parasiticus and decomposition of aflatoxins with reduced mutagenicity.

Wheat, maize, barley and peanuts are different sources of mycotoxins. If toxins invade crops before harvesting these are called as field fungi. If it invades post- harvest, they are called storage fungi. Mycotoxins cause heavy economic losses. These are common in tropical and sub-tropical countries in and around Asia.The highest occurring mycotoxin in Asia was FUM (fumonisins), detected in 85% of the samples at an average concentration of 1,354 ppb(parts per billion) .

Research – The effect of royal jelly and propolis alone and in combination on inhibition of Aspergillus parasiticus growth, aflatoxin production, and aflR gene expression