The Centre for Food Safety (CFS) of the Food and Environmental Hygiene Department (FEHD) today (July 20) released the findings of its Summer Food Surveillance Programme 2021. The results of over 2 000 food samples tested were satisfactory except for three samples that had been announced earlier. The overall satisfactory rate was 99.85 per cent. A CFS spokesman reminded members of the public to remain vigilant and pay more attention to food safety and environmental hygiene as the hot and humid climate of summer in Hong Kong facilitates the multiplication of bacteria.

The spokesman said that 1,800 food samples were collected for microbiological tests, 132 samples for tests of metallic contaminants and 70 samples for tests of veterinary drug residues. Samples tested for microbiological tests and metallic contaminants were all satisfactory. As for the tests of veterinary drug residues, except for three samples (one for venus clam, one for clam and one for common oriental clam) in which chloramphenicol were found, the remaining samples were all satisfactory. The overall satisfactory rate was 99.85 per cent.

The CFS has announced the test results of the unsatisfactory samples and conducted follow-up actions, including instructing the concerned vendors to stop sales and remove the products from the shelves, tracing the source and informing the authority of the origin.

The spokesman pointed out that although unsatisfactory samples for microbiological tests were not found in the Summer Food Surveillance Programme 2021, bacteria grow faster in warmer environments in summer, and that the hot weather increases the risk of food poisoning caused by bacteria.

The spokesman reminded members of the public in particular that raw or undercooked foods are high-risk foods as there is not any, or inadequate, heat treatment to eliminate the microorganisms present that can pose risks to human health. Raw or undercooked foods are also associated with the risk of contracting antimicrobial resistance (AMR) microorganisms. Although these AMR microorganisms may not cause illnesses, they may transfer their antibiotic resistance genes to other bacteria inside the human body, therefore affecting the effectiveness of the future use of antibiotics when needed. Susceptible populations such as pregnant women, young children, the elderly and people with weakened immunity (i.e. people with chronic diseases or those on antibiotics treatment, antacid and long-term steroids or drugs given to prevent transplant rejection, etc) are of higher risk of being infected or having complications if they consume raw or undercooked foods due to their health status. They should therefore avoid eating raw and undercooked foods.

Members of the public should pay attention to food safety, especially in summer, and observe the following Five Keys to Food Safety in order to reduce the risk of foodborne diseases:

Members of the public are also reminded to dine out in licensed and hygienic restaurants. Food premises selling sushi and sashimi or other high risk food require a special permit. The public should patronise only those with relevant licences or permits issued by the FEHD.

The Centre for Food Safety (CFS) of the Food and Environmental Hygiene Department today (July 23) instructed the trade to suspend the import of ready to eat raw oysters harvested in Samish Bay of the United States (US). The trade should also stop using or selling the product concerned immediately should they possess it.

A spokesman for the CFS said, “The CFS noticed that the Washington State Department of Health reported that ready to eat raw oysters harvested in Samish Bay of the US, which were suspected to be contaminated with Vibrio parahaemolyticus, were under recall. Upon learning of the incident, the CFS immediately contacted local major importers for follow-up. A preliminary investigation found that the importer, Asia-Taylor (A&T) Finefoods Limited, had imported some of the affected product which was on sale in its retail outlet. For the sake of prudence, the CFS has immediately instructed the trade to suspend the import into and sale within Hong Kong of all ready to eat raw oysters harvested in the abovementioned area in the US, and instructed the importer to stop sale and remove from shelves the affected product.”

The spokesman pointed out that as oysters feed by filtering a large volume of seawater, pathogens (such as Vibrio parahaemolyticus) can accumulate in them if they are grown in or harvested from contaminated water. Raw or partially cooked oysters are high risk foods. Susceptible groups, such as pregnant women, young children, the elderly and people with weakened immune systems or liver diseases, should avoid eating them.

The CFS will inform the US authorities and will also notify the local trade. It will continue to follow up on the incident and take appropriate action to safeguard food safety and public health. An investigation is ongoing.

Recently, the Centre for Food Safety (CFS) collected a soybean milk sample from a local food shop when following up on a food complaint. The sample was later found containing a bacterium known as Bacillus cereus (B. cereus) in an amount that exceeded the limit in the CFS’ Microbiological Guidelines for Food and was consided unsatisfactory. Soybean milk produced by local retail shops, such as soybean product shops and congee shops, usually has a short shelf life and requires stringent temperature control to maintain its safety. In this article, we will look into how the bacterium finds its way to survive in soybean milk production and how to prevent it. 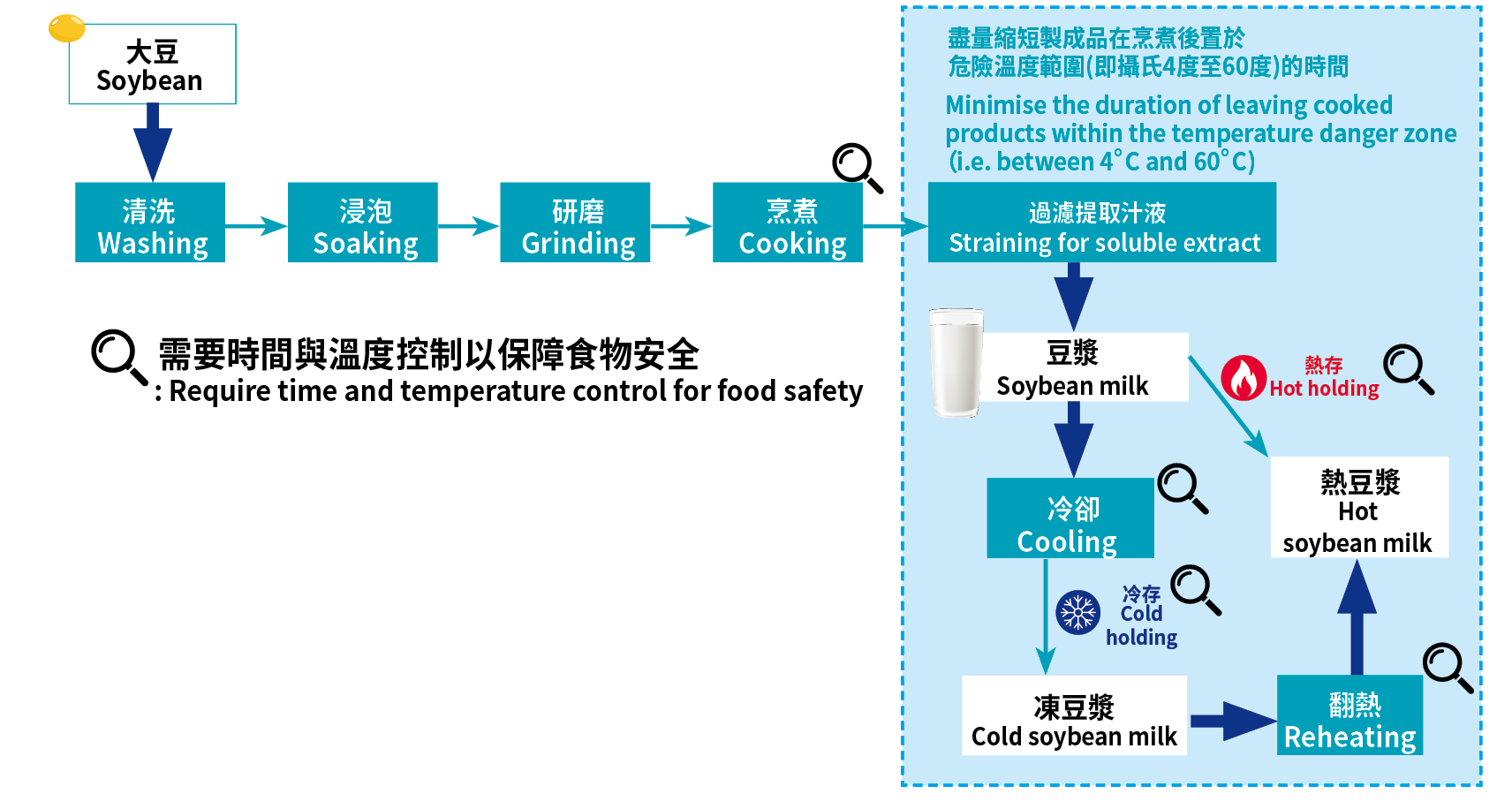 B. cereus is a spore-forming bacterium and is ubiquitous in the environment. It is naturally present in soils, plants, agricultural products, etc. Hence, soybeans used in the production of soybean milk (see Figure 1) may contain B. cereus.

While cooking is effective to kill vegetative cells of B. cereus, its spores are heat-resistant and can only be eliminated by high temperature treatment, e.g. 121°C for 3 minutes. In this regard, the cooking temperature of soybean milk production at retail shops is not sufficient to kill the spores. Instead, the heat of cooking can not only induce the spores to germinate and become vegetative cells, but also create a favourable environment for the cells to grow by eliminating other microorganisms competing for growth. As a result, if the soybean milk is left under ambient condition for a prolonged period of time after cooking, vegetative cells can proliferate into a large number.

The vegetative cells can then produce a heat-resistant emetic (i.e. causes vomiting) toxin.  Even if contaminated soybean milk is reheated subsequently, it can still cause food poisoning that is characterised by causing the victim to vomit shortly after consumption.

Prevention by Time and Temperature Control

Despite the tenacious nature of B. cereus, soybean milk can still be safely produced. To prevent the microbiological hazard, certain production processes require time and temperature control (see Figure 1). First, the soybean slurry from grinding process has to be cooked thoroughly to kill B. cereus vegetative cells and other bacteria.  The heat treatment can also denature soybean enzymes that affect digestion of consumers.

After cooking, it is important to minimise the duration of leaving cooked products within the temperature danger zone, i.e. between 4°C and 60°C, in order to prevent the growth of vegetative cells of B. cereus formed from surviving spores. Cooked soybean slurry is strained through cheese cloth for soluble extract, i.e. soybean milk.  After straining, freshly made soybean milk can be held at above 60°C for hot serving.  As for cold soybean milk, it has to be cooled as quickly as possible, i.e. cooling to 20°C within two hours, and then to 4°C within the next four hours or less. Cooled soybean milk can then be stored at or below 4°C for cold serving. At certain food service businesses, soybean milk in cold holding may be reheated for serving. In that case, it has to be reheated with temperature reaching at least 75°C.

Last but not least, the production environment and equipment have to be kept hygienic to reduce microbiological contamination.  In particular, the equipment used after cooking processes, such as cheese cloth, container and dispenser, has to be cleaned after each use to minimise the building up of B. cereus which may contaminate cooked soybean milk of the next batch.

Advice to the Trade

Advice to the Public

Hong Kong – Not to consume a kind of cheese from Italy with possible Shiga toxin-producing E. coli contamination

The Centre for Food Safety (CFS) of the Food and Environmental Hygiene Department (FEHD) today (September 2) announced the results of a seasonal food surveillance project on mooncakes (first phase). The results of 137 samples tested were all satisfactory.

A spokesman for the CFS said that samples covering traditional, snowy, ice-cream and other types of mooncakes had been collected from various retailers (including online retailers) and food factories for chemical and microbiological tests and nutrition content analysis.

The chemical tests covered colouring matters, preservatives, aflatoxins and metallic contaminants. Microbiological tests covered different pathogens. For nutrition content analysis, the contents of sodium and total fat of the samples were tested to see if they were consistent with the declared values on the nutrition labels.

The Centre for Food Safety (CFS) of the Food and Environmental Hygiene Department today (August 31) released the findings of its food safety report for last month. The results of about 15,200 food samples tested were satisfactory except for seven samples that were announced earlier. The overall satisfactory rate was 99.9 per cent.

The Centre for Food Safety (CFS) of the Food and Environmental Hygiene Department today (July 17) announced the results of a recently completed targeted food surveillance project on Bacillus cereus and Clostridium perfringens in ready-to-eat food. None of the samples taken were found to be unsatisfactory, according to the Microbiological Guidelines for Food.

“A total of 300 samples of ready-to-eat food were collected from different retail outlets including online retailers and food factories for testing of Bacillus cereus and Clostridium perfringens this year. The samples included dim sum, rice, noodles, pastries, soya products, stewed meat and meat sauce,” a spokesman for the CFS said.

Cooking heat can activate the germination of Clostridium perfringens spores, which survive in anaerobic conditions like inside internal cavities, rolls of meat, stuffed poultry, or gravies. The organism can then multiply in the area where the oxygen level is low. Cooling of food at ambient temperature for a long period also allows rapid multiplication of the bacterium. Hence, foods prepared in bulk, especially cooked meat, poultry dishes and juices, which are stored at ambient temperatures with a long cooling period after cooking are at high risk. In food poisoning caused by Clostridium perfringens, common symptoms include sudden abdominal pain, nausea and diarrhoea.

The spokesman reminded the trade and the public not to take the risk lightly. They should always maintain good personal and food hygiene to ensure food safety. When handling food that is not to be consumed immediately, keep it at a safe temperature (above 60 degrees Celsius or at 4 degrees C or below). Consume perishable prepackaged food and beverages promptly after opening or reheating and avoid prolonged storage at ambient temperatures. Reheat food thoroughly with the core temperature at 75 degrees C or above. If cooked foods are to be cooled, the trade should adopt measures to shorten the required cooling time to restrict the growth of Bacillus cereus and Clostridium perfringens in heat treated food. For example, install specific rapid chilling equipment, divide food into smaller portions and place it in shallow containers and in an ice bath. They should also closely monitor the refrigerator temperature and maintain a temperature log. Cross-contamination of food during cooling and storage should be prevented. The trade should also observe the Good Hygienic Practices in each stage of production to ensure safe and proper processing of the food and to comply with the limits stipulated in the Microbiological Guidelines for Food.