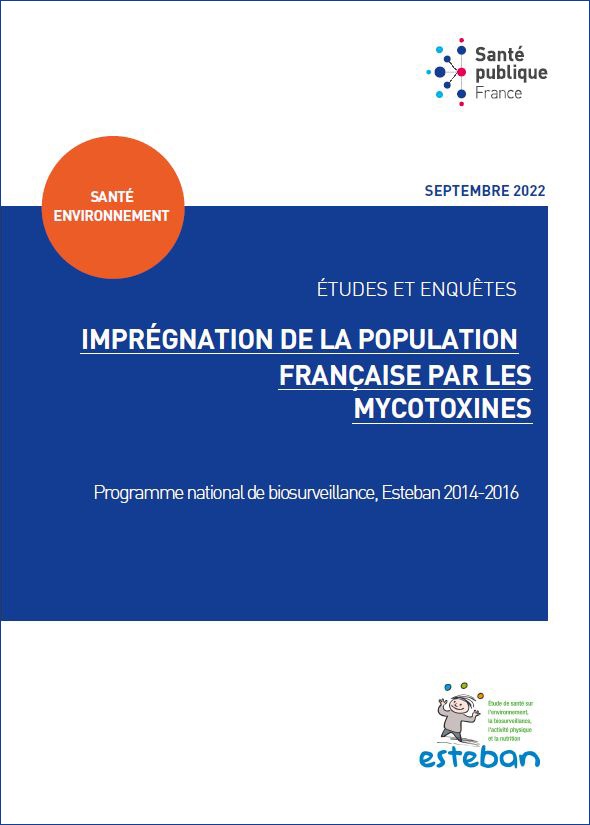 Mycotoxins are substances secreted by certain toxigenic strains of several species of molds (microscopic fungi) such as Aspergillus, Penicillium, Fusarium, Byssochlamys, Alternaria etc. which in particular contaminate cereals and plants before and or after harvest.

The toxicity of mycotoxins depends on the species and the nature of the toxin. They are generally thermostable, resistant to transformation processes and can be found in many foodstuffs and be responsible for acute or chronic poisoning in humans or animals.

Of the 300 to 400 known mycotoxins, about ten of them can cause animal or human pathologies: aflatoxins (AF), ochratoxin A (OTA), fumonisins deoxynivalenol (DON), T-2 and HT-2 toxins, trichotecenes (TC), zearalenone (ZEN) and patulins which contaminate fruits, especially apples. In 1993, the IARC (International Agency for Research on Cancer) classified aflatoxins in group 1, carcinogenic to humans; AFB1, considered one of the most potent natural genotoxic carcinogens, is classified in group 1 (IARC, 2002).

The target organ is the liver. As for OTA, it is considered possibly carcinogenic for humans and classified in group 2B (1993); in humans as in animals, the kidney is the main target organ. OTA would also have immunotoxic and neurotoxic effects. Due to their harmful effects, exposure to mycotoxins must remain as low as possible to protect the population. L’ WHO encourages the monitoring of mycotoxin levels in food because they represent a risk for human and animal health.

In France, data on the impregnation of the French population by mycotoxins are almost non-existent, with the exception of a study carried out in three French regions [1, 2]. The Esteban cross-sectional study (Health study on the environment, biomonitoring, physical activity and nutrition) made it possible to measure the levels of impregnation by aflatoxins and OTA of the population in mainland France aged 6 at 74 years old between April 2014 and March 2016.

The purpose of this note is to present the results of impregnation by AFs and OTA, and to analyze the determinants of exposure to OTA in adults . Aflatoxins B1, B2, G1, G2, M1 were not quantified, neither in children nor in adults. For OTA, the percentage of quantification was equal to 45.5% in children and 47.8% in adults. The geometric means of the levels of impregnation by the OTA were lower than the LOQ or not provided considering the important rate of censorship.

The search for the determinants of exposure by OTA, essentially dietary, in adults showed an increase in impregnation with the consumption of processed meats. Not all associations could likely be identified due to small sample size. A future biomonitoring study could make it possible to deepen the search for determinants of the impregnations observed and to broaden the knowledge of the

Mould in complementary feed to horses in Sweden

Straw is a common, high-fiber, low-energy ingredient in U.S. dairy heifer rations. While we normally monitor grain quality to watch for harmful mycotoxins, it turns out straw can carry its own mycotoxin risk, according to a recent feed quality evaluation by Alltech, Inc.

Each year, Alltech conducts comprehensive mycotoxin testing programs in the U.S., Canada, and Europe to assess the mycotoxin risk in newly harvested grain crops. For the first time this year, wheat and barley straw were added to the sampling in Europe.

Danish farmers were worried about the damaging effects of wet weather both pre- and post-harvest. Because excessive moisture delayed straw harvest, the crops lay in the field for extended periods, damaging quality and fueling mold contamination.

A total of 70 straw samples from Denmark were evaluated. Deoxynivalenol (DON) was identified in 84% of samples, and emerging mycotoxins were found in 70% of samples. All told, 95% of samples contained some form of mycotoxin, with 50% containing two or more.

According a bulletin on mycotoxins in forage shared by the University of Wisconsin, DON may be a marker for other mycotoxins in contaminated feeds. When young dairy animals consume mycotoxins, they can be at risk for feed refusals, diarrhea, and immunosuppression. Additionally, mycotoxin-induced outcomes may be vague, and include unthriftiness, rough haircoat, poor body condition, and reproductive problems.

Alltech technical advisor and veterinarian, Dr. Radka Boutova, DVM, suggested adding straw to the list of feedstuffs that are screened for mycotoxins if it is a commonly used ingredient in a young stock ration. This is particularly important if the straw crop was stressed and/or delayed in the field due to unfavorable weather conditions, or for any straw that shows visible signs of mold.

South Africa (SA) is a leading exporter of maize in Africa. The commercial maize farming sector contributes to about 85% of the overall maize produced. More than 33% of South Africa’s population live in rural settlements, and their livelihoods depend entirely on subsistence farming. The subsistence farming system promotes fungal growth and mycotoxin production. This review aims to investigate the exposure levels of the rural population of South Africa to dietary mycotoxins contrary to several reports issued concerning the safety of South African maize. A systematic search was conducted using Google Scholar. Maize is a staple food in South Africa and consumption rates in rural and urban communities are different, for instance, intake may be 1–2 kg/person/day and 400 g/person/day, respectively. Commercial and subsistence maize farming techniques are different. There exist differences influencing the composition of mycotoxins in food commodities from both sectors. Depending on the levels of contamination, dietary exposure of South Africans to mycotoxins is evident in the high levels of fumonisins (FBs) that have been detected in SA home-grown maize. Other potential sources of exposure to mycotoxins, such as carryover effects from animal products and processed foods, were reviewed. The combined effects between FBs and aflatoxins (AFs) have been reported in humans/animals and should not be ignored, as sporadic breakouts of aflatoxicosis have been reported in South Africa. These reports are not a true representation of the entire country as reports from the subsistence-farming rural communities show high incidence of maize contaminated with both AFs and FBs. While commercial farmers and exporters have all the resources needed to perform laboratory analyses of maize products, the greater challenge in combatting mycotoxin exposure is encountered in rural communities with predominantly subsistence farming systems, where conventional food surveillance is lacking.

Aflatoxin B1 in Brazilian groundnut kernels for birdfeed in the Netherlands

Ergot (Claviceps purpurea) in peas from Belgium in the Netherlands

Ergot in rye from Poland in Germany

This introduction is not part of the Animal Products Notice, but is intended to indicate its general effect.

This notice supplements the requirements of the Animal Product Regulations 2021 and sets requirements for microbiological sampling and testing of animal material and animal products intended for human consumption.

Who should read this Animal Products Notice?

Why is this important?

A failure to comply with this notice may be an offence under section 135(1)(c) of the Animal Products Act 1999 and may result in further action by an animal products officer.

Aflatoxin in Argentine groundnuts in Germany and the Netherlands