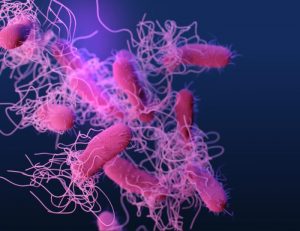 Salmonella enterica is a leading worldwide cause of foodborne human illnesses (WHO, 2015).

Salmonella isolates can be differentiated into serotypes according to the Kauffmann-White classification based on their flagellar (H) and somatic antigens (Grimont P. & Weill FX, 2007) or using genome-based serotyping approaches (Banerji S. et al ., 2020 ).

Among the> 2500 referenced serotypes (Ibrahim GM and Morin PM, 2018), Enteritidis and Typhimurium have proven to be both consistent contaminants along the food chain but more importantly as prominent isolates from diseases in humans (EFSA & ECDC, 2021).