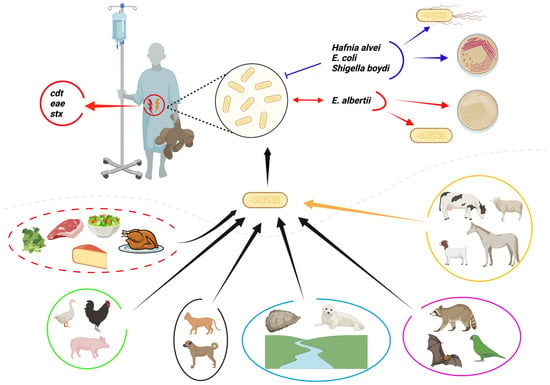 Escherichia albertii, a close relative of E. coli, is an emerging zoonotic foodborne pathogen associated with watery diarrhea mainly in children and immunocompromised individuals. E. albertii was initially classified as eae-positive Hafnia alvei, however, as more genetic and biochemical information became available it was reassigned to its current novel taxonomy. Its infections are common under conditions of poor hygiene with confirmed transmission via contaminated water and food, mainly poultry-based products. This pathogen has been isolated from various domestic and wild animals, with most isolates being derived from birds, implying that birds among other wild animals might act as its reservoir. Due to the absence of standardized isolation and identification protocols, E. albertii can be misidentified as other Enterobacteriaceae. Exploiting phenotypes such as its inability to ferment rhamnose and xylose and PCR assays targeting E. albertii-specific genes such as the cytolethal distending toxin and the DNA-binding transcriptional activator of cysteine biosynthesis encoding genes can be used to accurately identify this pathogen. Several gaps exist in our knowledge of E. albertii and need to be bridged. A deeper understanding of E. albertii epidemiology and physiology is required to allow the development of effective measures to control its transmission and infections. Overall, current data suggest that E. albertii might play a more significant role in global infectious diarrhea cases than previously assumed and is often overlooked or misidentified. Therefore, simple, and efficient diagnostic tools that cover E. albertii biodiversity are required for effective isolation and identification of this elusive agent of diarrhea. View Full-Text