Food safety is an absolute priority for Co-op and we are determined to tackle Campylobacter. How will we do this? By working together with our farmers and suppliers to reduce the incidence of Campylobacter. We have been keen supporters of the initiatives the FSA (Food Standards Agency) have driven to combat Campylobacter.

Co-op were one of the first retailers to sign up to be part of the Foods Standards Agency’s ‘Acting on Campylobacter Together’ (ACT) campaign. The joint aim was to rapidly introduce and share the best workable and available technologies and techniques in food production and across the supply chain.

“The challenge we set of reducing the number of people who get ill from campylobacter has been achieved. In the absence of any other clear indicators, we can reasonably say that the work that we and the food industry have done from farm to fork has given us this really positive result for public health.

“This has been achieved by working with the industry to tackle this difficult problem and raising consumer awareness. We commend the efforts of the larger retailers and the major processing plants who supply them, all of which have shown significant improvement and many have achieved the target we set to reduce the highest levels of campylobacter. They have invested a lot of effort and money into interventions to tackle the problem.

From January 2017, food retailers have published our own Campylobacter test results for fresh chicken, in collaboration with the open data scheme on Campylobacter with the Food Standards Agency. 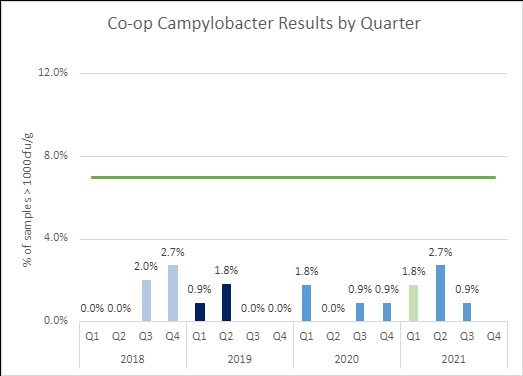