Research – Strategies for Nitrite Replacement in Fermented Sausages and Effect of High Pressure Processing against Salmonella spp. and Listeria innocua 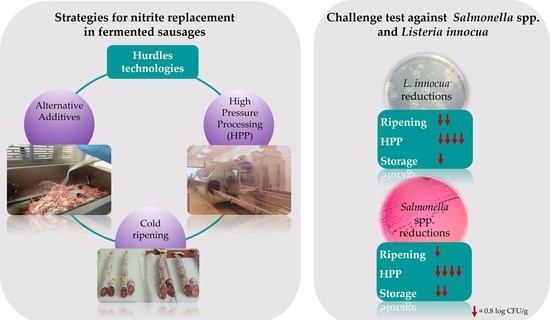 The development of nitrite-free meat products is a current industrial concern. Many efforts have been attempted to replace the nitrite effect in cured meats colour formation and pathogens control. Our previous work evidenced that lactic acid and a cold ripening were the best hurdle technologies for nitrite-free fermented sausages from metabolomics. In the first part of this work, we investigated the effect of lactic acid compared with both two alternative additives (glucono-D-lactone and a mix of sodium di-acetate/sodium lactate) and with low-nitrite sausages, all of them following either cold or traditional ripening. For this purpose, microbiological analysis, pH, water activity (aw), and a sensory study were performed. All nitrite-free sausages (cold or traditional ripened) showed quality and safety traits similar to low-nitrite traditionally ripened ones used as control. In addition, sensory study revealed that sausages with lactic acid were the most preferred cold ripened samples, supporting that this is an optimal strategy for the production of nitrite-free sausages. We selected this product for further studies. Indeed, in the second part, we evaluated the impact of ripening, and other hurdle technologies as High Pressure Processing (HPP) and under-vacuum storage against Listeria innocua and Salmonella spp. by a challenge test. Maximal declines were obtained for ripening along with HPP (i.e., 4.74 and 3.83 log CFU/g for L. innocua and Salmonella spp., respectively), suggesting that HPP might guarantee nitrite-free sausages safety. Although the quality of raw materials remains essential, these hurdle strategies largely contributed to nitrite-free sausages safety, offering a promising tool for the meat industry.