From the end of August to October, 52 people from 14 regions with the same strain of Salmonella Coeln fell ill. The cases were aged 0-85 years (median 35 years) and about as many were women (n = 27) as men (n = 25). No new cases have fallen ill or been sampled with the outbreak strain since 26 October and the outbreak is now judged to be over. The outbreak has been investigated in collaboration between the affected infection control units and municipalities as well as the county administrative board, the National Food Administration and the Swedish Public Health Agency.

The Swedish Public Health Agency has conducted a so-called case-case study based on surveys collected by the regional infection control units, where those who fell ill with salmonella answered questions about what they had eaten during the week before the illness. In the study, where responses from outbreak cases were compared to responses from salmonella cases that did not belong to the outbreak, it was found that there was a statistically significant relationship between disease with the outbreak strain and consumption of sprouts. A suspected link to sprouts had also been identified during a local investigation in one of the regions.

Based on when the outbreak cases have fallen ill and where sprouts have been consumed, it is believed that a suspected contaminated batch was delivered to grocery stores, wholesalers and commercial kitchens at the end of August. Sampling and analysis of remaining sprouts in cases of disease, as well as extensive sampling and analysis at the production stage have not shown salmonella.

The results of the epidemiological investigation show that fresh sprouts delivered at the end of August were the most probable source of the outbreak, but this has not been confirmed by microbiological analyzes.

Figure 2021-11-18. Number of outbreaks per day for morbidity f with Salmonella Coeln (n = 52), 2021-11-18. For cases marked in purple, information on the date of illness is missing and instead the sampling date has been specified. 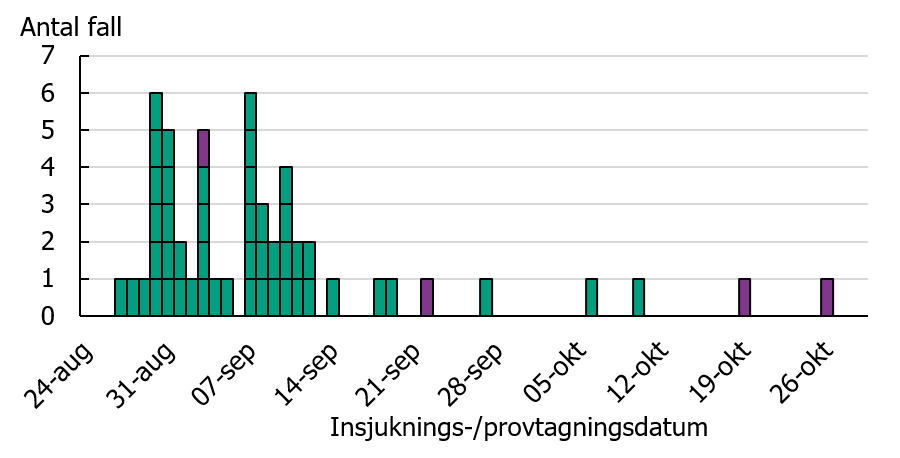 As of August 28, 31 people have been confirmed infected with Salmonella Coeln. Whole genome sequencing (analysis of the bacterium’s genome) has shown that the disease cases carry the same strain of Salmonella Coeln and are thus suspected of having been infected by a common source of infection. The cases, which are aged 0-85 years (median = 28 years), are resident in twelve different regions in Sweden and 18 (58 percent) of the patients are men. Affected infection control units, municipalities and County Administrative Boards, together with the National Food Administration and the Swedish Public Health Agency, are investigating the outbreak to identify the source of infection that is suspected to be a food with a wide distribution in Sweden.

Figure 2021-09-24. Disease curve for outbreak cases with Salmonella Coeln (n = 31), 2021-09-24. For cases marked in purple, information on the date of illness is missing and instead the sampling date has been specified. 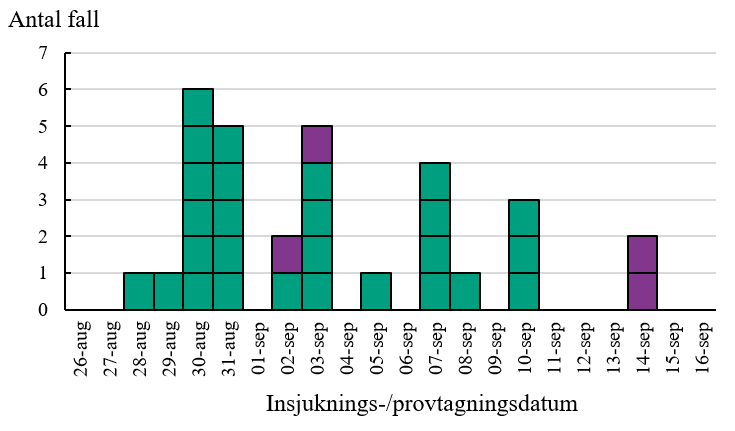